Down the Rabbit Hole!

Down the rabbit hole and through the looking glass it's time for your daily dose of crazy!

So as I was attempting to find some pretty pictures of Our Lady (as I am wont to do.) on google I discovered a picture of Our Lady of La Salette with the pope on the other side and I thought "hey I run a bitchy blog lets see what this is"

If you thought the obsessed-with-the-third-secret-of-fatima gang were scary....

Listen, I'd love to be all up into Catholic conspiracy theories like the real pope in hiding in Italy or that the third secret was never revealed or that Fr. Corapi is an alien (or something, what the hell happened there any way?) but I just don't have time.  But these people...ok I'll just pop some quotes down here


"Judeo-Masonic Anti-Pope John Paul II actually did this in a little known ceremony in March, 2004: Obeying the command of this April 21, 2010 Third Secret, John Paul II transfers remains of St. Peter from the Vatican to Fatima in a symbolic admission that the Vatican no longer has the Apostolic Authority."

Did you know that praying the 5 "Our Father's" is actually Satanic?  I guess that Jesus fellow and His writing prayers was severely misguided since He didn't listen to Our Lady of Fatima.
"This woman is not Sr. Lucy, but a phony Sr. Lucy that was implanted and specially picked to serve the purpose of the false Fatima line and the Vatican II religion that has been foisted on the world since the Fuentes interview. In addition to the photographic evidence, the fact that the post-Vatican II “Sr. Lucy” is not the real Lucy screams out all over the place."
I'M IN HEAVEN!  God I love crazy people!  Is this Kitsch?  I don't even know, it might be too much to be kitsch who knows, who cares this is HILARIOUS!
Posted by Saint Kitsch at 6:35 AM 1 comment:

I can't help it that I'm so popular.  My beauty is a curse.

Here is what dear reader Jessica said about this blog's motto which I hastily translated in google.

I thought I'd take it upon myself to let you know that Google Translate and similar tools are awful at translating English into Latin. They tend to give up on certain words, like "can" in "Si vos can loco niteo in is , loco niteo in is". Didn't even try to translate the darn thing. As a lover of Latin, mottoes, and snark, allow me to humbly submit a revised translation: Si ponere flavitem potes, pone flavitem. "Loco" means "place", as in Rome. Ponere is the verb that means "to place" or "to put". And "niteo" literally means "I glitter" which isn't at all what I think you meant, so I replaced it with a noun form, "flavitas" which means "shiny goldenness". The "on it" bit can be left out entirely, because mottoes as a rule are succinct and Latin has a lovely way of intimating things. Literally translated, what I've written would say "If you can put glitter [on it], put glitter [on it]." I hope this doesn't come off as pedantic or nitpicky, but when one takes four years of Latin in Catholic high school, then goes out into the world, one jumps at chances to actually use this random and seldomly useful knowledge.


I am not drunk enough to understand a word of what I just read.
But thanks for the help!  It's appreciated! I'll be copyin' and pastin'!
Posted by Saint Kitsch at 7:01 AM No comments:

Why does this exist?

This comes to us from reader Laura from Germany. 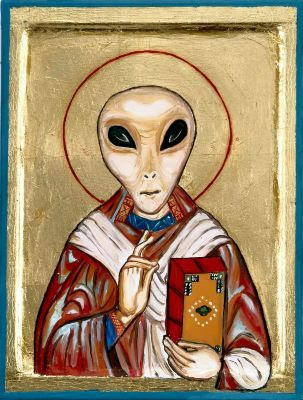 Somewhere in the world.  Someone thought "hey you know what'd be cool?" and no one stopped them from completing the task.
Posted by Saint Kitsch at 6:58 AM 1 comment:

This is from the very funny Maureen who first calls this
"Latavio Divino"
(I actually died when I read that.)

Because you should really pray in the shower.

I don't want to live on this planet any more.
"Whey Better Farm is excited to introduce the newest addition to our line of soaps: scripture soap. If you are one who loves the Bible you know that there is always the great desire to share this love with others. I myself wondered how to possibly incorporate the Word of God into the work of my hands: my soap. One day I had an idea of burying a Bible verse into a bar of soap so that God's Word could offer words of hope, comfort and challenge to people as it has to me. And thus, scripture soap was born. After a bit of trial and error in perfecting the technique I discovered a way to do just that. Now I am offering these unique soaps here. As of yet and to my knowledge there are no other soaps like these in the world! These bars of soap each contain a unique line from scripture embedded in the middle of them. There are over 100 different verses so it is unlikely that anyone would ever get the same verse twice. They make a very thoughtful gift because they remind us to always keep what is the most important before us: God."
Rub the Word of the Lord on your ass, thanks to Whey Better Farm!
Also there is a kind of soap that has beer in it.
http://www.bemadeclean.com/scripture-soap.html
Thanks Maureen!
Posted by Saint Kitsch at 5:45 PM 1 comment: