He sells these comics to pay for his cognative behaviouralist

Before I begin, let me once again say I'm about as pro-life as you can get.

But i am now about to unleash the greatest pro-choice argument that has ever been. 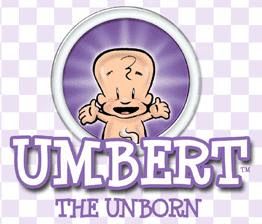 Umbert....the unborn.
Umbert the unborn is a..."comic" written by a clinically insane man named Gary Cangemi about a devloping baby named 'umbert' (which is an abortion of a name.) and his spunky pro-life statements from his mother's womb!

Ok, if the WTF ness of it hasn't blown your brain up, this will. This, dearest, is what Gary thinks is funny.

WHAT
THE
ACTUAL
FUDGE.
The fetus has smuggled a freaking PHONE into the womb.....at some f*cked up doctors office where the ultra sound is in colour...his mother is craving a "peanut butter and tuna sandwich" which is also, believe it or not, a sign of meth addiction. Careful, Umbert. Her cracked-up pimp boyfriend is disgusted by her eating of his stollen packet of peanut butter from dining and dashing at Denny's with a can of tuna from the Dollarama (which is actuall not as weird as, hmm, i don't know A TALKING FETUS.) And the punchline is "hey! I'm new at this!"
Ugh.


I really can't stand the whole fetus-with-the-intellegence-of-a-child thing. They don't. They're alive. Abortion is murder. But let's not pretened your fetus has any cute little quips while it still looks like a shrimp.
Posted by Saint Kitsch at 7:43 AM